need a new project? or ten?

can you believe that we're almost to february? we're 3 weeks into january! how did that happen?!!?


there are SO MANY THINGS going on in blog-land these days. i'm a little disturbed by it, to tell you the truth. how do all of these people have time? why aren't they spending their januarys finishing late christmas presents? did they all just throw up their hands in defeat on december 31st? that must be it. and really, good for them. if the presents are late, they're late, an extra month or two won't make a difference. or maybe they said screw the handmade gifts for 2011... i applaud that as well.

i was wishing that i had the time to do a quilt-a-long or two, but that's just not gonna happen at the moment. then i decided to keep track of the interesting quilt-a-longs so that i could go back to them when i DID have time, and there were so many of them that my list turned into this post. if you know of others, leave a comment with a link, please.


there are multiple scrappy quilt-alongs at the moment, and it seems to be good timing - enough people have been quilting long enough to have ridiculous scrap piles!

Jodi from Pleasant Home is running a Sew Scraps Along with tons of inspirational posts, links to tutorials, prizes and so much more.

Rachel over at Stitched in Color is doing a Scrap Attack Quilt-a-long, with weekly tutorials and/or interviews with other bloggers. and if you finish a scrap quilt by the end of March, you can win prizes!

justabitfrayed is doing a scrappy quilt-a-long with a specific pattern, and it's so pretty!

however, the most popular Quilt-Alongs by far are star or sparkle themed. HUGE trend for 2012, obviously! (and isn't my little group quilt cutting edge then?) 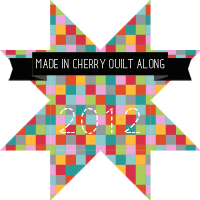 Jeni from In Color Order and Megan from Canoe Ridge Creations are coordinating a Sparkle Quilt Along that's super cute. 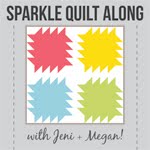 Elizabeth Hartman of Oh Fransson is running a quilt-a-long for her pattern Sparkle Punch.
here's a pillow top made up by flickr user GoingSewCrazy. isn't it gorgeous!? Hannah from Heartbreak Homestead has posted the first block of her Starry Skies Sampler Quilt project, and it's very lovely. and vintage sheet stars!!! Holly told me about this yesterday, and i'm so in love! Sheila at Thought and Found is creating a stunning star quilt, with blocks that she's designed as well as blocks designed by various guests. i know i totally don't have time for such an ambitious project, but oh my goodness!

if you're not into stars, you still have a few other options...

Jeni from In Color Order has started an HST block of the month for 2012, so you could do that instead!

or how about the Swoon-a-long that Katy from Monkey Do is organizing, using the
Swoon pattern by Camille Roskelley? or the monthly mini-quilt sew-along that Randi at I Have To Say is doing for 2012? each quilt will start on the 2nd tuesday of every month, and the supply list will go up about a week before that. january was courthouse steps, don't they look lovely? Sarah from Narcoleptic in a Cupboard is in the process of designing a really lovely quilt as well, called the Stained QAL because of the quilt's stained glass look. you can see the original quilt here. Jenna at Sew Happy Geek is doing a modern/traditional mixed sampler style quilt-along that looks awfully cute. 3 blocks have been posted so far, and the flickr group is so pretty!

Kim's Crafty Apple is coordinating a House and Tree Quilt-Along that could be super fun! there will be 16 blocks total, all designed by different people, and each block will contain either a house or a tree, or both. Two blocks have been posted so far, and more are coming! i saw a sneak peak of the block that will be released on January 31st and it's GORGEOUS! seriously, i think i'd be happy making 16 of that same block.... as everyone in the VMQG knows, Terry's pretty amazing.

or maybe you'd rather focus on colour for your theme? Pantone released their official colour of the year, and it's "Tangerine Tango" Ali from a²(w) and Erin from Two More Seconds are hosting a Tangerine Tango Quilt Challenge, complete with two categories and awesome prizes! the flickr group is already starting to look pretty fabulous... and i'm not even an orange fan! and if you're thinking that your freemotion could use some help,
Leah from the Free Motion Quilting Project has started a new project for 2012


or how about something completely superfluous? QuiltJane is hosting a "Dress up your Roll" contest. Yes, THAT roll! it is possible to make toilet paper covers that don't involve ruffled dresses and half barbies - just think of them as mug rugs in tube form! you can enter as many times as you like, and the international prize is pretty damn fine. my toilet paper roll might be needing an outfit...

so. feeling motivated? you've got lots to start with!


apparently Fat Quarterly blogged about some of these the other day.... i'd say that this will be a lesson to me on getting my ass in gear and not leaving drafts in blogger for weeks at a time while i add to them - and on keeping up with other blogs - but frankly, i haven't learned anything! it just means that great minds think alike, that's all. right? ;)
posted by amy dame at 11:17 PM

I just tab opened everyone of these ... now I'm sitting down with my morning tea to do some reading. Thanks for the round-up, Amy!

Great list, Amy! I thought I was well-versed in modern quilting sites, but at least half of these are news to me! I wish I had time to Swoon along, and to do half a dozen others! At least the posts will stay up long after the qals are over so I can join in late if I choose.

Glad you found Thought and Found, I couldn't help thinking of you when I saw those stars made from vintage sheets!

There are so many. Where do people get this energy on Jan.1st? I am doing the Made in Cherry quiltalong, but I need to sew some of my own stuff this year. One year I'll get smart and complete everything so that on Jan.1st my roster will be open for new projects!! Happy to have you back in town, Amy. Hope to see you next meeting. - K

I will be "Staining" with Sarah, "Swooning" with Katy and am halfway through my Made In Cherry, got to love a bit on camaraderie!

Great list Amy! This just reinforces that I need to find a way to retire immediately!

So many quilts, so little time. Count me in as one of those people blew off anything handmade this Christmas. I'm not proud of that. I'm sticking to a scrappy quilt at the moment...but those big swoony patterns are very tempting. I love how they look.

Yay! I'm going to work on the oh my stars quilt! I think it would be perfect for a toddler bed quilt. When my little Hamster is a toddler that is. Never hurts to be prepared right??!! ( she isn't even out of the womb yet! LOL)Now to start trying to beg, borrow, and steal vintage sheets to add to my small collection! lol